While Dogecoin started out as a joke between two blockchain devs, it’s grown into a hugely popular cryptocurrency - with a circulating supply of more than 132 billion coins and a dedicated subreddit with more than 2.2 million Doge fans hodling for the moon. But like all cryptocurrencies - you’ll pay tax on Dogecoin no matter where you live. We’re looking at everything you need to know about the OG of meme coins, including Dogecoin tax and how Koinly can help.

Dogecoin was created by software engineers Billy Markus and Jackson Palmer in 2013 as a joke.

The engineers were disenfranchised with the crypto market and set out to prove that anyone could make a cryptocurrency and so Dogecoin was born, based on the beloved Shiba doge meme.

Depending on how you see it - the joke backfired because the internet loved it and began heavily investing in Dogecoin, attracting more than a million visitors within the first month of launch.

While the popularity of the coin has surged and plunged variously since its inception, it’s got a die-hard following and some notable celebrity fans including Elon Musk, Snoop Dogg and Gene Simmons.

Despite the strange backstory - you can do everything with Doge that you can do with other cryptocurrencies. You can buy, sell and trade Dogecoin on all major crypto exchanges, as well as mine Dogecoin like you’d mine Bitcoin, but without the expensive equipment! You can even add Dogecoin to liquidity pools and some other DeFi protocols by wrapping it.

Of course, when you make any of the transactions above with Dogecoin, you might need to pay taxes. But the type of tax you’ll pay will depend on the specific transaction and where you live. Here’s what you need to know about Dogecoin taxes.

You’re probably wondering, is Dogecoin taxed? Can you even tax a meme coin?

Yes. Dogecoin is taxed just like any other cryptocurrency. This means that you’ll pay either Income Tax or Capital Gains Tax on your Dogecoin, depending on the transaction you make and where you live. Let’s take a quick look at both kinds of tax on Dogecoin.

Each tax office has a slightly different take on Dogecoin taxes, but almost all of them view cryptocurrencies like Dogecoin as a kind of capital asset - like a stock or a rental property. 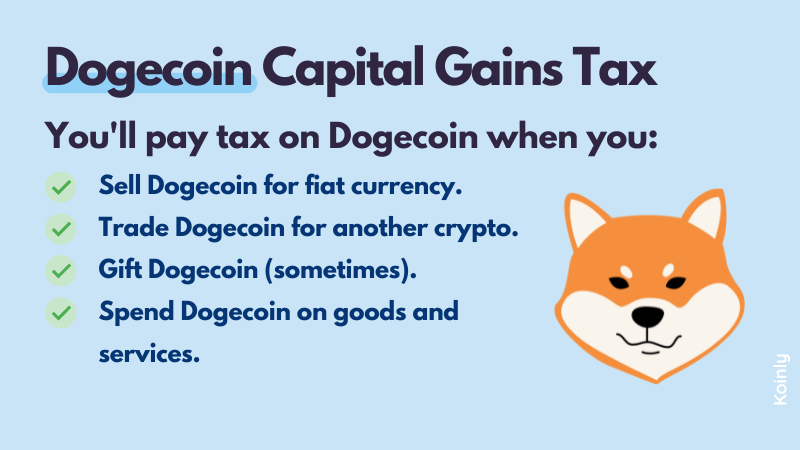 Like we said above - you’ll only pay Capital Gains Tax on any capital gain you make. A capital gain or loss is the difference in value between when you bought or acquired your Dogecoin and when you sold it.

If you didn’t actually sell your Dogecoin, but disposed of it by trading it, spending it or gifting it - take the fair market value of your Dogecoin in your chosen fiat currency on the day you disposed of it and subtract your cost basis from that to calculate your gain or loss.

Crypto can also be subject to Income Tax for specific transactions. The rules on this vary a bit more from country to country. For example, some countries tax hobby crypto mining as income, while others only tax crypto mining businesses.

However, in general, you’ll pay Income Tax whenever you’re seen to be ‘earning’ new Dogecoins. Some examples of this include:

If your transaction is viewed as income, calculating your income from Dogecoin is easy. Simply take the fair market value of Dogecoin at the time you received it in your chosen fiat currency - i.e. USD. You’ll pay Income Tax on this amount at your normal Income Tax rate.

Even if you’ve paid Income Tax on Dogecoin, you’ll still pay Capital Gains Tax on any profits when you later spend, swap, sell or gift Dogecoin. So you'll be paying tax twice in some instances.

As we said above, the rules on what is considered income vary quite a bit depending on where you live and your tax office. Let’s break each transaction down a little further to see how different tax offices might view your Dogecoin income.

Getting paid in Dogecoin tax

If you’re getting paid in Dogecoin - like Dogecoin millionaire Glauber Contessoto - wherever you live, this is going to be viewed like any other salary. It’ll be seen as income and subject to Income Tax, as well as other wage levies like National Insurance or Social Security.

Tax on mining Dogecoin and other cryptocurrencies generally depends on the scale at which you’re mining. Many countries don’t apply income tax to hobby miners - so those doing it at a small scale making little or no profit. This said, some other countries have taken a harsher stance on Dogecoin mining tax and tax all crypto mining activities under Income Tax. For example:

Learn more about crypto mining tax around the world.

Like mining, each tax office has a slightly different view on whether airdrops are a kind of income or not. In summary:

Some schemes will pay you out a referral bonus in crypto - like DOGE - to promote their service or product. These are known as affiliate schemes.

Most tax offices haven’t actually clarified specific DeFi tax guidelines yet and Dogecoin is quite new to the DeFi space due to the fact that it isn’t native to the Ethereum blockchain.

However, there are some protocols - like REN - that effectively allow DOGE to be wrapped and used on the Ethereum blockchain as renDOGE. Similarly, there are a couple of semi-decentralized liquidity pools - like Binance Liquid Swap - that allow you to add DOGE to liquidity pools and earn rewards.

Though there isn’t specific tax treatment on DOGE DeFi from tax offices just yet - we can break down the likely tax treatment of these transactions based on the current crypto tax guidance.

Will you always pay tax on Dogecoin? What about when you’re buying Dogecoin or transferring Dogecoin?

There’s some good news after all that Dogecoin tax information - you won’t always pay tax on Dogecoin. Some tax free Dogecoin transactions include:

Looking for an easy way to manage tax on Dogecoin and other cryptocurrencies?

Koinly crypto tax software can help. Simply sync the crypto wallets, exchanges and blockchains you use with Koinly and let it do the rest. It’ll calculate your crypto taxes including your income, capital gains and losses and expenses for you - based on where you live and in your chosen fiat currency.

All you need to do is download your crypto tax report from the tax reports page. Koinly can generate tax reports based on where you live - for example, IRS Form 8949 and Schedule D for US investors or the ATO myTax report for Australian investors.