Many crypto investors have put money into a new coin or token - only for the value of that token to drop to zero shortly after. Crypto rug pulls are sadly commonplace in the market, but there are ways to spot and avoid them, as well as tax benefits if you do fall foul of a rug pull. We’ve got everything you need to know about crypto rug pulls, including the most infamous rug pulls of all time, how to avoid a rug pull, what you can do if you’re part of a rug pull and how to deal with rug pulls in your tax return.

What is a crypto rug pull?

Rug pulls are when a new coin token is created - usually by an anonymous party. The creators will hype and pump the new token through social media and other platforms and just when the token reaches an all time high in value… they’ll abandon the project, with all the investors' funds.

The name rug pull comes from the idea of the investors having the rug pulled out from underneath their feet. The project is going well, prices are skyrocketing and then suddenly it all comes crashing down. 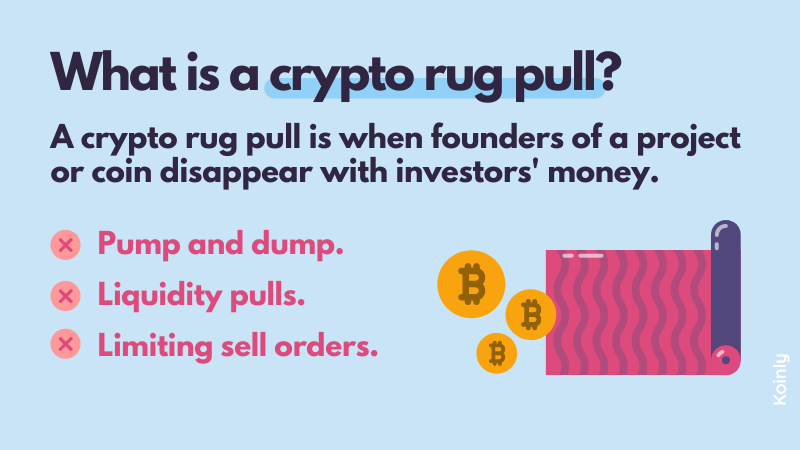 Liquidity pulls are the most common kind of rug pull and they rely on dexes to work. A fraudulent developer will list a new token on a dex, paired with a well-known crypto like ETH. They'll hype the new token and attract more investment into the liquidity pool and the new token will rise in value. Once the token reaches a new high, the developer will withdraw all the ETH from the liquidity pool - leaving the other investors high and dry.

Limiting sell orders is a more unusual rug pull, but it can happen. Even recently, the Squid Game token scam is an example of this kind of technical manipulation. In this situation, the developer of the new token codes the tokens so they're the only party able to sell. Once the token reaches a peak, they'll dump their tokens and the remaining tokens become worthless.

Now you know the common kinds of rug pulls, you need to know how to avoid them.

How do I avoid a rug pull?

Hey, have you heard of this new token? It’s already shot up more than 200% in value - you should get in now so you don’t miss out. Celebrities are promoting it so you know it’s legit.

It should. Rug pulls all work slightly differently but the pattern they follow is the same. It’ll be a relatively unheard of token that’s suddenly getting shilled everywhere you look.

More recently, celebrities have joined the fray. The developers often pay them to promote their new token. Kim Kardashian and Floyd Mayweather are both being sued over their promotion of EthereumMax, Steven Seagal was fined more than $300,000 by the SEC after promoting B2G and Lil Uzi promoted the Eternal Beings Solana NFT rug pull.

There are some other common rug pull red flags, including:

Now you know the common signs of a rug pull, let’s take a quick look at some of the most infamous rug pulls that have happened so far.

The Biggest Rug Pulls in Crypto

It’s estimated that investors lost more than $7.7 billion to rug pulls in 2021 alone. It’s a painfully common occurrence due to the lack of regulation in the market. All this to say, this list could go on endlessly, so we’ll just cover five of the biggest rug pulls in recent memory.

Bitconnect was one of the first - and most infamous - rug pulls. Back in 2016, the Bitconnect ICO launched. Investors traded Bitcoin for Bitconnect coin and in return received high yields - supposedly guaranteeing up to 40% returns each month.

Aggressive marketing efforts attracted more and more investors. If you were in the crypto market at the time, you'll remember this spawning the notorious BitConnect meme.

The value of BCC peaked to more than $400 in December 2017. Around this point - both the UK and US governments started paying attention after many accusations that BCC was nothing more than a Ponzi scheme. In January 2018, Bitconnect shut down and BCC prices crashed by 92%, while the creators made off with more than $2 billion.

Riding on the high of the hugely popular Netflix show - a new token, SQUID - launched. The token was marketed as a play-to-earn token. It started selling at $0.01 and in less than a week the price soared to $2,861.

When investors wanted to cash out their gains though - they were unable to sell.

This led a few investors to go digging and discover that the founders didn't exist on any prominent social networks - like LinkedIn. As well as this, those tweeting issues started getting blocked, the telegram group and discord groups closed and upon further investigation of the whitepaper - there were several claims that were outlandish and impossible to verify.

The founders started selling their supply, leading the price of SQUID to plummet by 99% in a week, and investors with now worthless tokens.  It's estimated the developers made more than $3.38 million from the rug pull.

The Bored Bunny NFT project was announced in December 2021 - so it's another recent rug pull. Like other rug pulls, the project launched with huge claims including merch, a private metaverse, 10x investment returns within a few days and promotions by celebrities including Floyd Mayweather, Jake Paul and David Dobrik.

The project launched and sold out within hours - with the founders racking up 2000 ETH in primary sales.

One blockchain detective looked further into the project and found that the NFTs supposedly owned by celebrities and influencers were actually bought by a dev wallet associated with the project - promoting claims of insider trading. Further research revealed that many of the founders had previously been attached to other less than reputable projects. The project has now fallen to a floor price of 0.085 ETH.

Another NFT rug pull and as recent as 2022, Frosties was an NFT project that launched early this year. The project launched and the 8888 NFT collection sold quickly - netting the founders around $1.3 million. But just as soon as the funds hit OpenSea, they were transferred to other wallets, the discord server shut and a final tweet appeared on the Frosties Twitter account saying simply, "I'm sorry."

The Frosties rug pull isn't notorious because of its ingenuity or the amount stolen - it's because the creators behind the Frosties NFT project have been arrested. Prosecutors in the US have charged Ethan Nguyen and Andre Llacuna with money laundering and fraud charges relating to the rug pull. It's one of the first times someone has been charged for an NFT rug pull and if convicted, the creators face up to 20 years in prison.

Luna Yield (LUNY) was a yield aggregator on the Solana blockchain. Marketed as a legitimate project and aided by its association with other reputable projects like SolPad, Luna Yield attracted a lot of capital in its Initial Dex Offering (IDO) stage.

Three days after its IDO launched, the funds raised were sent to Tornado Cash - an untraceable mixing service - and the website and all social media platforms shut down. It's estimated the founders made around $6.7 million from the rug pull.

Luna Yield is a great example of a rug pull that doesn’t look like a rug pull. It didn’t use many of the tactics other rug pulls do and it was associated with other reputable projects, leading many people to unsuspectingly invest. While rug pulls are often obvious, some of the most profitable break this mold.

While rug pulls are always unethical, it’s not always clear whether they’re illegal. It all depends on the kind of rug pull and whether it’s a so-called hard or soft rug pull.

Hard rug pulls are malicious from the start. This means the developers set out with every intent to defraud investors by adding malicious coding into the token - like with the Squid Game Token.

Soft rug pulls meanwhile aren’t so clear cut. This refers to when token developers dump their crypto assets in a short space of time, leaving a worthless token behind. Dumping is unethical, but it isn’t technically fraudulent in many instances.

What to do if you’re part of a rug pull?

While we can all do our best to look out for the red flags that can indicate a rug pull, the reality is scammers are getting smarter and better at what they do just as quickly. This means unfortunately, unless the market is eventually somehow better regulated, rug pulls are going to happen.

So, what can you do if you’re involved in a rug pull?

How do I report a rug pull on my tax return?

A very common question we get is, “I’ve invested in a token that was rug pulled, can I count this as a capital loss?”

The IRS guidance is very clear that lost or stolen crypto is not considered a capital loss- but rug pulls don’t really fall into this guidance. A rug pull technically isn’t a theft - you still hold the token(s) after all and therefore still control the asset, it’s just plummeted in value to an essentially worthless asset.

At this point you have unrealized losses. To claim a capital loss, you need to realize your loss by disposing of your token. Normally, you’d do this by selling or trading your token. If you can do this - even if the token is worth almost nothing - do it. This lets you claim the loss - so the difference from the price you bought asset for to the price you sold it for - as a capital loss on your tax return.

You can then offset this capital loss against any capital gains you have from the year, reducing your overall tax bill. If you have no gains, you can carry it forward to a future tax year to offset later.

If you can’t trade or sell your token due to a lack of demand - another alternative is to send it to a burn wallet. This means you effectively dispose of the token(s) for $0 - so you can still claim a capital loss.

All you need to do is sync the wallets, exchanges and blockchains you use with Koinly and we’ll import your entire transaction history, across your whole portfolio. You can do this via API or by importing a CSV file of your transactions.

Once you’ve added your wallets, Koinly identifies the cost basis of all your assets, each taxable transaction and calculates your subsequent capital gains and losses, as well as the fair market value of any crypto income.

All this information is available in a simple tax summary (free of charge!). If and when you want to download your tax report, upgrade to the paid Koinly plan that suits you and download a crypto tax report when you need to file your tax return.