The IRS stance on crypto taxes is inconsistent - particularly when it comes to crypto staking. While they refuse to view crypto as a fiat currency - the current guidance suggests staking rewards, like mining rewards, could be subject to Income Tax. On top of this, when you later sell, trade or spend staking rewards, you’d pay Capital Gains Tax. Many crypto investors and regulation experts have stated this stance is unfair - which is why Tezos stakers Josh and Jessica Jarrett decided to take the IRS to court to settle it once and for all. Here’s everything you need to know about the case and what it means for your crypto staking tax in the future. 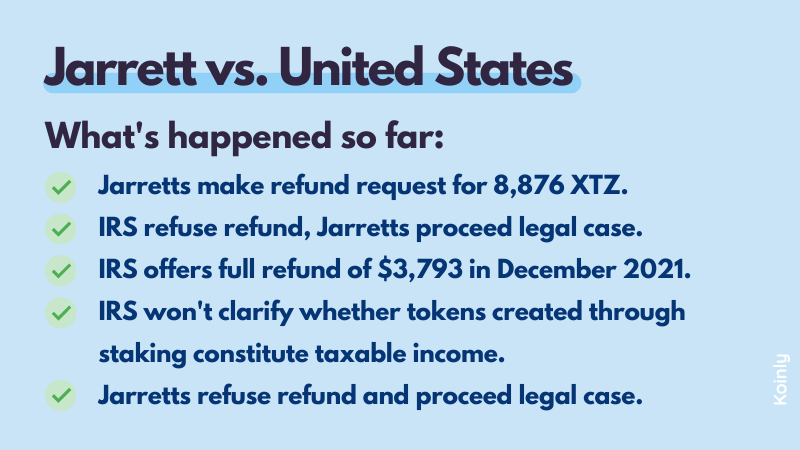 So what’s the outcome for IRS staking crypto taxes?

Bloomberg Tax reported on the 4th of October 2022 that the US District Court for the Middle District of Tennessee sided with the IRS, dismissing the Jarretts' case as moot.

District Judge William L. Campbell Jr wrote, "“The Court finds no reasonable expectation that Plaintiffs will be subject to the same action again. As stated above, the instant controversy was limited to whether Plaintiffs were entitled to a refund of taxes paid for the 2019 tax year. This particular issue is not capable of repetition as any subsequent claim for refund would necessarily apply to a different tax year.”

Josh Jarrett has since tweeted stating he plans to appeal.

Can the IRS be sued?

Yes, you can sue the IRS - and many people have, the Jarretts are by no means the first.

The IRS has no guidance on staking rewards just yet - but the conservative approach recommended by most tax experts is to treat staking rewards as income upon receipt and capital assets upon disposal, which means both Income Tax and Capital Gains Tax applies.

How does Koinly deal with staking?

You can find out about staking transactions and how Koinly deals with them in our staking help guide.